Welcome to everyone at The Ensemble Theatre working on Cinderella!

On this site, you will find my research on Cinderella. I will be adding more info as our production progresses. Let me know if you have questions or topics that I should add.

I look forward to meeting and working with you!
Posted by David McTier at 7:00 AM 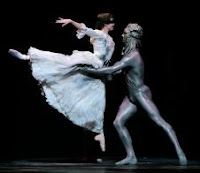 from Molly Glentzer's review in the Chronicle:

Do not leave your sense of humor at home when you head to Houston Ballet's bodacious new Cinderella. Even with your eyes closed — which is not recommended — you'd know there was something funny going on with Stanton Welch's version, created in 1997 for The Australian Ballet. The audience chuckles continuously.

Welch is so confident of this response, he's choreographed a moment when the corps de ballet issues a big, bossy "Sssshhhh." Which of course gets another laugh.

His jumping-off point is the much darker Grimm Brothers' Ash Girl. Forget that fairy godmother and pumpkins. In one of the best scenes, Cinderella's mother, risen from the dead, orders her corps of ghosts to weave a ballgown from spiderwebs.

Welch also incorporates Dandini, the Prince's valet, from Rossini's opera La Cenerentola; and Buttons, Cinderella's faithful companion-servant, from English pantomime. Throw in a little Tim Burton, a little Thriller-era Michael Jackson and a little Cirque du Soleil, and you begin to get the picture.

In spite of the Houston Ballet orchestra's nimble rendering, some of this made me think, "Is this really Serge Prokofiev's score?" I'm not complaining; it's entertaining to hear the music from a fresh perspective.

Welch's Cinderella is a cartoon, although where it matters most — in lush pas de deux sections — the romantic emotion is sincere. There are also some Welch trademarks — notably, the sexually aggressive, near-naked dancers of Act 3. (Bulls and some quasi-Indian-harem princesses.)

I love the surreal elements and the late Kristian Fredrikson's sumptuous costumes: statues and mannequins that move; tattered ghosts; carnival characters with balloons, and a winged unicorn wagon.

I'm not sure I buy the notion that Welch's pixie-haired, scrappy Cinderella harbors any ambition to land a prince. Her first impulse when she's upset is to throw a punch. But she's ultimately lovable.

Amy Fote, a little dynamo of exuberant sweetness, danced Thursday's opening with such Leslie Caron-ish charm, I wanted to pinch her on the cheeks. She was rapturous in the two big pas de deux with Ian Casady, her endearingly geeky true love, Dandini.

Welch offers some wicked class commentary: Everyone from the cheerful, spoiled egomaniac of a Prince (Connor Walsh has a blast in this role) on down the social ladder is better than someone else. The haughty, gossipy and slightly debauched court are buffoons; but the message is more cutting, and subtle, when Dandini fails to notice Cinderella after she's lost her finery; or when Cinderella, even in her patched britches, brushes off Buttons.

Welch fills the stage with swiftly moving bits full of dazzling jetés and spins. (Waltz, what waltz?) He doesn't miss a beat, literally: When percussion instruments or violins punctuate the score, there's always an emphatic gesture to match: A hip circle, wide and low. A pelvic thrust or two or three. A shoulder shimmy. A clawed, grabby hand. A head tic. Make that lots of head tics. These shenanigans, while fun, sometimes distract from simultaneous, more straightforward choreography. The final pas de deux is thrillingly romantic, especially after the empty stage fills with a starlit sky.

The sets begin sumptuously. Act 1's graveyard is the yummiest, a dreamlike cave dripping in softly-lit moss. Act 2's flat peacock-themed curtains aptly reflect the shallow court personalities. We're expected to let our imaginations take over in Act 3, much of which is danced in a black void and begins with a militaristic scene that reveals the Prince as a despot.

Thursday's performances were lively and crisp. Oliver Halkowich (Grizabella) and Steven Woodgate (Florinda) danced gamely en pointe (pique turns and arabesques, even!) as the stepsisters; James Gotesky's domineering Stepmother commanded the stage. Ilya Kozadayev was a warm, loveable and high-flying Buttons. Barbara Bears was an elegant Mother, and Christopher Coomer was a tender, vulnerable Dad.
Melody Herrera, Mireille Hassenboehler and Bears will dance the lead on other nights, with Walsh, Simon Ball and Coomer also alternating as Dandini.
http://www.chron.com/disp/story.mpl/ent/5602556.html
Posted by David McTier at 6:10 AM

Choreography by Ben Stevenson
(originally set in 1970 for the National Ballet in Washington, DC)

Review by the Houston Press for the 2003 Houston revival:
http://www.houstonpress.com/2003-03-20/culture/slipper-magic/

Act I: Cinderella's stepmother is busily

embroidering a scarf she will wear to the Palace

Ball that evening. The Father is also in the

room, and the Stepsisters tease him

unmercifully. Cinderella enters and stops them.

They turn on her furiously and the Stepmother

orders her to clean the room. The Stepsisters

drag the Father from the room. Cinderella picks

up the broom, commences to sweep, then takes

a portrait of her dead Mother from its hiding

place and gazes at it longingly. Her Father

returns and is overcome with remorse when he

sees the resemblance between Cinderella and his

him, but they are dragged apart by the

Stepsisters, who also snatch away the

Suddenly, the door opens and an old woman enters,

begging. The Stepmother gives her the picture of

Cinderella's mother to get rid of it, but the beggar

woman sees the resemblance to Cinderella and

hands it to her. Cinderella offers the woman some

bread, which she accepts and then

A dressmaker and wigmaker arrive to adorn the

Stepsisters for the Ball, followed by a dancing

master, who attempts the impossible task of

teaching the Stepsisters the rudiments of dancing.

The family departs for the Ball, with the exception of

Cinderella, who remains behind. She tries to assuage

her loneliness by pretending that the kitchen broom

is her partner at the Ball, but the pretense is too

much for her, and she bursts into tears. At this

into a beautiful fairy Godmother, who transforms

the kitchen into a forest, complete with Dragonflies

The Fairy Godmother gives Cinderella a pair of glass

slippers, and the Fairies of Spring, Summer,

Autumn, and Winter perform for her, changing the

seasons as they dance. Cinderella's rags become a

beautiful gown, but the Fairy Godmother shows her

a clock, and warns her that at midnight, the magic

gown will change back into rags. She then

transforms a pumpkin and four lizards into a coach

and horses, and Cinderella is driven to the Ball like a

Act II: At the Palace, a Jester welcomes

the arriving guests, who are all somewhat taken

aback by the Stepsisters. The Prince enters and

greets the assembly, then gallantly invites each of

the Stepsisters in turn to dance with him, much to

the amusement of the guests. At this moment, the

Ball is interrupted by the arrival of Cinderella in her

coach, and the Prince immediately falls in love with

her. The guests are offered oranges -- the rarest food

to be had -- and when one of the Stepsisters is left

without one, Cinderella gives up her own, without

the Stepsister realizing her identity. While the Prince

and Cinderella are dancing together, the clock strikes

midnight. Cinderella's clothes turn to rags and she

rushes from the ballroom. The Prince cannot restrain

her, but finds one of the glass slippers which she has

Act III: Back in the kitchen, Cinderella

remembers the Ball as if it were a beautiful dream,

but finds the remaining glass slipper in one of her

pockets. She quickly hides it as the Stepsisters

gave them. The Stepmother announces the arrival

of the Prince with his Jester and courtiers in search

of the owner of the glass slipper they bear with

them. Each of the Stepsisters in turn vainly tries to

squeeze an oversized foot into the tiny slipper. When

the Prince notices Cinderella sitting shyly by the fire,

he asks her father if she may try it on. As she moves

to do so, the second slipper falls from her pocket.

The Prince is overjoyed in spite of Cinderella's

ragged appearance, and asks her to marry him.

Cinderella forgives her Stepmother and sisters for

their previous cruelty to

As the Prince returns the glass slipper to the Fairy

Godmother, the kitchen is transformed into a magic

glade where Cinderella and her Prince dance a

their new Princess at her

betrothal.
Posted by David McTier at 6:07 AM

David McTier
David McTier is Professor of Theatre at Sam Houston State University in Huntsville, Texas. He holds a Ph.D. in theatre history and criticism from the University of Texas at Austin.